Johnie's experience includes everything from programming to syndication as well as sales to management for local AM/FM stations and global digital radio services. After filling in as the weekend DJ at his local Top 40 station as a teen, he picked up his MBA at UCLA to focus on revenue and operations. Johnie launched the first subscription drives as Business Manager for KCRW (LA's public NPR station), expanded international distribution for U.S. radio programs, production libraries, and software for ABC Radio, FirstCom, TM Century, and many others, introduced audio advertising into the Live365.com internet radio network, as well as launched a number of branded radio channels for Oprah Winfrey's HARPO Radio, Hertz, Target, and Progressive Insurance, among others. Additionally, with responsibility for broadcast and digital content licensing, he has arranged for multinational rights and served as an expert witness for the U.S. Copyright Royalty Board's Rate Setting proceedings. 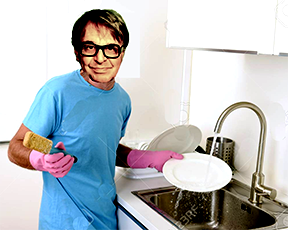 As Floater would say, "doin' the dishes."


Hey Floater! So tell me, what all do you do for Media Creek as General Manager?

I like to say “I do the dishes.” I find myself surrounded by such a talented group of programmers, some programming code, others programming tunes, many doing both. I wouldn’t want them doing anything else. So, I like to take away much of the mundane, yet still critical, repetitive tasks. You know like paying the bills, filing performance reports, reviewing NDAs. By the way, remind me, I have some redlines to review when we’re finished. Better yet, these elements are my passion as much as a playlist is to others here.

The money.😉 Actually, the lack of money. Long gone are the generous Chinese investors that funded Live365’s earliest days going back to 1999 when listeners would think you were a lunatic to pay money to hear radio and when advertisers thought programmatic was from a Jules Verne novel. Now we’re a few kids on our own, driven by the passion of our broadcast community, and a belief that there's a working model for small webcasters to be “on air”, just as Apple, Spotify, and iHeart. No disrespect. They have just as much right to the digital airwaves as we do. Just not ALL the airwaves.

Anyway, what was your question? Oh, best part of working here. Definitely the peeps. The team, the webcasters, the listeners. Everyone’s here for a passion. It’s actually not the money at all.

Is ECLECTIC a genre? I was lucky enough as a high school kid to be part of freeform radio of the ‘60s where the DJ was in control, so they played and said what they wanted. When I got to LA in the ‘70s, it started to change. Radio stations were purchased by corporations. To stay in the biz, I completed a UCLA MBA in hopes of working for one of those corporations. But, formats took over. All pop, all country, all news. Scripts were handed to the DJs along with their playlist. Lucky for me, I stumbled on a little public radio station in nearby Santa Monica, KCRW, that needed some business infrastructure and grant writing that tapped my talents. Better yet, their programming was the definition of eclectic. Wide range music mixes from Sunny Ade to Talking Heads to Manhattan Transfer. Salsa to midnight jazz. BBC radio drama to NPR’s All Things Considered. I love a night of rock, a dinner with jazz, Sunday mornings with soca, but for my daily tune in, for the rest of my life, please mix it up. Just give me access to Live365 and I’ll find my way!

So, let us know, who is your all-time favorite band/artist?

I was the kid who filed the records in the local Top 40 AM/AOR FM station I worked for in the ‘60s. What stood out were the unusual ones. No Cream, Airplane, Creedence, Deep Purple. No Stones, Beatles, Bee Gees, Box Tops. No, it was the ones that didn’t make it to the air. The ones I could take home! And there were many. From Captain Beefheart to Dick Dale to Wild Man Fischer. One T. Rex. Don’t get me started. But my favorite, no doubt, it was the Mothers of Invention. Frank Zappa and rotating crew. Jimmy Carl Black, Roy Estrada, Ray Collins. There was something going on beyond the music. ;-) I wrote the engineers on each album to ask for tips on how to get their job, what I thought was next for me. Even got a response from Frank one time written on a piece of toilet paper that I still treasure.

What's your favorite song by Mothers of Invention?

You got an evening? Give me Uncle Meat. Got a party? Let’s pull out Cruising with Ruben and the Jets. "Call Any Vegetable" for any dinner. I used to tune into the Live365 Zappa channel run by Frank’s family for years. Remind me to let them know we’re back!

Then again, when your gig is filing records, album art is the prime selector. So, if I was picking by favorite cover, you gotta love Mother's We’re Only In It For The Money, the perfect Sgt Pepper’s spoof.

Funny, it’s the same question I get living here in Paso Robles, Central California with a couple hundred small wineries. "What’s your favorite winery?" Here’s what I discovered. There’s no bad wine. Well, maybe a few. ;-( For me, what makes a good wine better is a good story. A story of the folks that made it and how. What they did before, how they got into making wine, the stories they tell and the passion that comes across. Again, it’s seldom the money for these “garagistes” wine makers. And, just as you taste the flavors of someone’s wine through their stories, hearing the stories behind the mix that comes from a passionate webcaster adds similar flavors to their station. At Live365, you're listening to a human DJ, a programmer, their own mix with no instructions on what to say or play. Lucky for me, working here, I’ve had the chance to connect with many of our webcasters and hear their stories “behind the playlist”. It’s this community of webcasters that’s my favorite station on Live365.