Are Your Halloween Broadcasts Spooktacular?

"Always be prepared" is a saying many of us are familiar with. This applies to most aspects of life, and can also greatly impact your live internet radio broadcasts. And during the spookiest of seasons, anything can go wrong!

There's almost nothing worse than that second-hand embarrassment we feel when something goes wrong for someone else -- like listening to a radio DJ fumble through an interview with a respected guest or the audio not being up to par right as an important or exciting announcement is made. One thing worse than that, though, is being that DJ and realizing after the fact that you could have prepared a little bit more.

As a radio DJ, you'll regularly get thrown curveballs. But the more prepared you can be, the better your live broadcasts will go.

Minimize Distractions
Your studio might be your kitchen table, a corner in your basement, or a dedicated section of an office building. Regardless of location, you'll experience distractions: trick-or-treaters ringing the doorbell, cars screeching down the street, coworkers carrying on a loud conversation during the office Halloween party (while you're trying to broadcast...). The list goes on!

To block all that out during your live broadcasts, check out some soundproofing options. You can hang thick blankets or carpet tiles up on the walls to absorb sound or invest in some sound proofing panels. 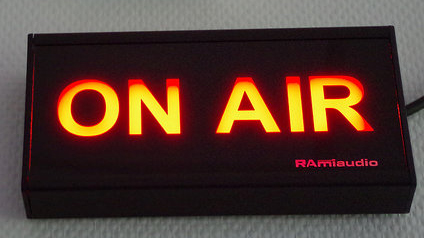 A light up "On Air" sign is a nice touch to add to your studio as well. Not only does it indicate to anyone who crosses your path to not interrupt while the image is lit up, it helps you to feel like a professional. And if you feel like a pro, you'll sound like a pro!

Following a Script
I don't mean reading verbatim every single word like you're giving a middle school report. No one wants to hear that! The kids in the back row will be asleep before you finish the second sentence. But, it's helpful to have a rough outline of what you want to accomplish during this particular Halloween special or interview with Freddy Krueger. It'll keep you on track and help minimize dead air if you lose your train of thought.

With that said, it's okay to deviate from the script. It's mostly there as back-up. You want to keep the flow of conversation going naturally. If you managed to snag "bio-exorcist" Betelgeuse himself for an interview, both he and the audience will get bored from the question/answer, question/answer format. Start with a question to get the interview started, but if he drifts from the "Handbook for the Recently Deceased" to the witch doctor that shrunk his head, let him!

Prepare Your Guests
Not only is it a nice gesture, but it can be beneficial to share some topics or interview questions with your guest (or their publicity manager) ahead of time. Some topics you might want to discuss are a big old NO with certain celebrities, so it's best to scratch those before you ask during the live interview. Other times celebrities may want to prepare a bit before the interview so they're not caught off guard.

Have Transitions Available
As mentioned earlier, you'll regularly be thrown curveballs. Things can and do go wrong. As the DJ, however, you're in charge. How you react to those situations is what being in control is all about.

Maybe your microphone cuts out (blame it on the ghosts!) or your guest says something off-putting that doesn't align with your station's values. If you can't immediately fix the situation or steer the conversation back on topic, you can cut to commercials or music with the push of a button. Have that transition ready!

Microphone
A decent microphone goes a long way. A few folks on our team recommend both the RODE Procaster and the Audio Technica AT2020USB+. Once you get your mic(s) set up, test them out before you start your live broadcast. You want to make sure you aren't too close to the mic so all the audience hears is really loud mumbling and breathing, and you want to make sure you're not too far away that you're barely audible.

Audio Processing Tools
Have you ever watched television and all of a sudden a commercial was so loud that you jumped? The same thing happens in radio. While that might be your goal during Halloween, to scare your listeners, you definitely don't want to do it unintentionally. Audio processors, such as Stereo Tool, can make your volume equal across the board. It will also help to make your audio sound more consistent, powerful, clear, and detailed.

Best Software for Broadcasting Live
Sometimes you just need a little something extra to stand out from the crowd, not to mention going live means you need to have an encoder. We recently compiled a list of the best software live Halloween broadcasts. All of these programs are compatible with your Live365 station.

See how many stations have joined the Radio Revolution at Live365.com.

How to Start a Profitable Podcast