Categorizing your music library is an important step in order to achieve an ideal playlist rotation. Last week we discussed three general categories within a music library: Currents, Recurrents, and Gold/Oldies. The example we went over was for a contemporary station, so currents divided further into Hot Currents, Medium Currents, and New Currents.

Now, how do you organize those categories in order to create an ideal playlist rotation? Back when the norm was for DJs to spin actual records, they would trace a circular record and divide the drawing up to resemble a clock. It was referred to as a “rotation clock.” Each sliver on the clock would represent a different piece of an hour of programming, like songs, jingles, DJ breaks, news, and more -- but in this example we’ll just focus on contemporary music.

Below are two sample clocks for a contemporary music station. As a reminder, A=Hot Currents, B=Medium Currents, C=New Currents, D=Recurrents, and E=Gold/Oldies. To read more about what each category means, click here. 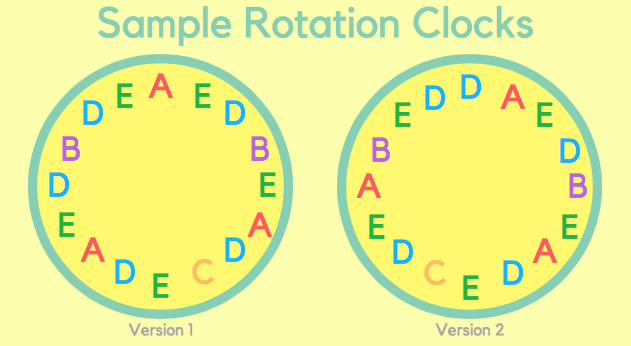 Stations often have numerous different clocks depending on the time of day, day of the week, or even time of year. Morning shows might play less songs and instead focus more on news, weather, and traffic. Weeknight evenings might focus on newer music for listeners to discover during rush hour traffic on their way home from work. Once Thanksgiving is over, some stations might gear up for the holidays by incorporating more holiday classics in their rotations.

As with every other aspect of radio, rotation clocks should have a good balance and a wide variety. You don’t want to bunch a bunch of new Top 40 songs together and on the flipside you don’t want to play a bunch of songs from the early 2000s in a row for a contemporary station.

Over the next few weeks, we will discuss the principles of programming music radio. Up next we’ll tackle important rules and considerations for creating a daily playlist.

Previous posts in this series include: Music Selection and Playlist Creation, Playlist Rotation, and Categorizing a Music Library.

See how many stations have joined the Radio Revolution at https://live365.com/listen. Keep up with the latest news by following us on Facebook and Twitter (@Live365)!