One of the best musical gems we've uncovered through the coal mine that is TikTok is LA pop artist Deza. She's a singer, songwriter, and music producer who creates what she calls "poetic pop." Having listened to Deza's discography - including her newest EP i don't do drugs - we can say with confidence her work exudes the same pristine, unconventional structure, and bold lyricism found within a piece of poetry.

Deza's tunes are rich with harmonic and electronic activity, making her songs sound like sonic ecosystems rather than simple pieces of audio with beginnings and endings. Whether she's pouring her heart and soul into songs like "Boy Violet" and "All of My Systems Are Nervous" or creating an amazing song with a robot voice because she's too sick to sing from strep throat, Deza is constantly pushing the boundaries of what music can be. Her expressive songwriting has even caught the attention of some high-profile writers in the biz.

For this interview, we asked our newest Live365 Emerging Artist how she got started making music, her experiences creating recent songs and visuals, and her love for a wonderful foster dog. Here's Deza! 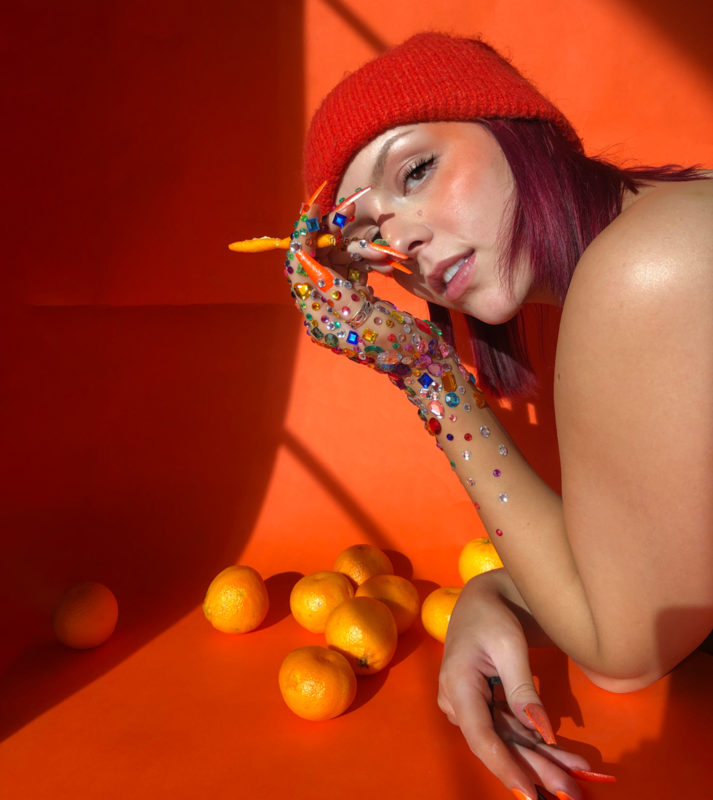 Tell us about yourself. Where are you from and how did you get your start in music?

I’m from Houston, Texas! I was lucky enough to grow up in a musical family, and spent most of my Sundays singing quartet harmony with my mom, dad, and sister. With a house always full of music, it became an integral part to who I was as a kid. From the jump, I was that annoying kid in elementary school who held all the teachers hostage at recess with my “performances” - music and performing were something I innately knew to be my joy.

We love your debut EP! What was the process of making i don’t do drugs like? How long did it take to make, and what was your inspiration behind it?

Thank you so much!!! It was so fulfilling, honestly. I’ve been a reckless releaser in the past, and this was the first project I spent MONTHS on. I think all around, it was 8 months in the making - which isn’t very long in the industry, but for me, it was intensely long, calculated, and thought through.

The creation period spanned most of my first year in Los Angeles, which really drove the core of the project. LA is filled with so many people so very unlike me, and it can be really disorienting, so I let that kind of come through the music. To me, it’s a coming of age project in a lot of ways. A new era, almost. It’s me asking: What defines me? What matters to me, now, and how is that different from before? Where do I fit in this landscape?

You’re an artist who not only values the quality of your music - you also get creative when it comes to visuals. What does your creative process look like when you’re brainstorming a new video or photo shoot concept, and do you have any tips for musicians looking to boost their aesthetic game?

Thank you, I’m so glad it comes across that way. The aesthetics of a project are something I really love to make, so it’s always incredible to let people see that visually creative side of me. Believe it or not, I started making music videos to other people’s songs before I was writing my own. I was 13, with a little digital camera, shooting and starring in and editing music videos in my bedroom. So in a lot of ways, the visual side of me predates the songwriter side, which is something I didn’t even consider until this question.

Creatively, and logically, there’s really kind of two ways it comes about for me. Either there’s a visual from the jump - I’m seeing the movie or artwork as I’m writing the song, it’s evolving as the song evolves, it’s influencing the creation of the song - or, the visual comes when the song is done, after I let the whole song speak to me. I suppose the third is letting someone else bring the vision in - like Walker did with the "All of My Systems" music video, which is entirely his concept. I think it keeps ebbing and flowing.

The best advice I can give is to utilize Pinterest, honestly. I have a mood board for each and every song (or collection of songs) that I have. You start somewhere, with one cool image, and let yourself kind of fall down the rabbit hole. If that part isn’t quite tantalizing to you, call on somebody! There are so many incredible videographers and photographers with incredible visions. Find your people and build the empire!

We hear you recently caught the attention of Emily Warren (Dua Lipa, The Chainsmokers). How did you two connect, and what is it like to be signed to Under Warrenty?

Yes! I was lucky enough to get my first publishing deal with Emily Warren and Prescription Songs. I’m still pinching myself.

Our story is kinda funny, because I met her at a school called LIMPI, a music industry school in Lillehammer, Norway. She was one of our mentors, and when she came through, I knew I had to write a song that I felt could catch her attention. I wrote a song called "Paris With Somebody Else," and it’s the song that changed my life. Luckily enough, that song did catch her attention, and long story short, here I am.

To be able to make money writing songs, and to be able to do it with such a competent and incredible team is such a blessing.

Anyone who’s frequented your Instagram recently has been blessed with pics of an adorable dog! Tell us about your pooch. Rumor has it you foster dogs?

Ahaha, yes!! Guys. She’s everything, it’s taking everything in my body not to adopt her. Her name is Carnita, and she’s the sweetest most mellow thing.

And yes she is a foster! She actually just got adopted, which I’m over the moon about. I foster from a place called Wags and Walks in Los Angeles. They care about these dogs so much, and it’s such a great way to be able to support the shelter and a dog when you can’t commit to one full time. I don’t know how I would’ve made it through these last few months without that sweet foster pup!

Do you have a favorite song you’ve released so far?

I actually think “if I don’t like her” is my favorite! Either that one or June. They’re both like, ripped straight from my diary, and are keystone pieces of my story, both lyrically and sonically. I also got to make both of these songs with people I love dearly, which means a lot long after the creation of the song. The thumbprint of those two are very near and dear to me!

What’s the biggest lesson you’ve learned in your musical career so far?

This s--t is relentless. (Can I curse?? We can bleep me, ha.) This is a great question, but truthfully, I feel like I haven’t learned any lessons. Everytime I think “Aha! This is a Lesson!!” I get knocked back off my feet and have to start over.

Maybe that's the lesson in itself - everyone is guessing, so you can too. I think I had this notion that I’d get to this level of LA, where it would all make sense and have structure and logic, and there’d be a red thread through everything. But there’s not. It’s chaos, it’s people at the highest levels literally guessing their way through this industry, and it’s exhausting. But I think that’s what makes it incredibly fun, too. The gamble never stops, quite literally ever.

Any tips for aspiring entertainers looking to break into the music biz?

Find that red thread, and cling to it for dear life. Mine is remembering my joy comes from writing my own story. I can write for other people all day, but if I don’t spend time making art for myself, I’ve lost the red thread and I can feel it, painfully. It’s never good for me, and in turn, is never good for the art.

I think also, let your priorities change, move, and rearrange. I had to hustle to get to where I am with reckless abandon. Everything else fell by the wayside - I didn’t have a boyfriend for 3 years, I used to wake up at 7, and be the first to the studio and the last to leave. If I’m honest, I enjoyed it - the rush of the busy. But now that it’s my job, if I hustled like that, I’d lose my absolute mind. You have to be able to shift gear, know when to kick it into overdrive but know when to step back and spend time with your other priorities. Know yourself, and know yourself well, so you can tend to yourself how you need to.

Any upcoming music or projects you’re cooking up that you can tell us about? We’d love to keep an eye on you!

I’m excitedly planning 2022!! My goal is to get back to reckless releasing, but in a more thought out way… let’s just say I’m studying Russ’s release records. I have close to 50 songs in the tank, and I’d rather them die in the sunlight than on a hard drive. But I’m constantly changing my mind, so we’ll see! 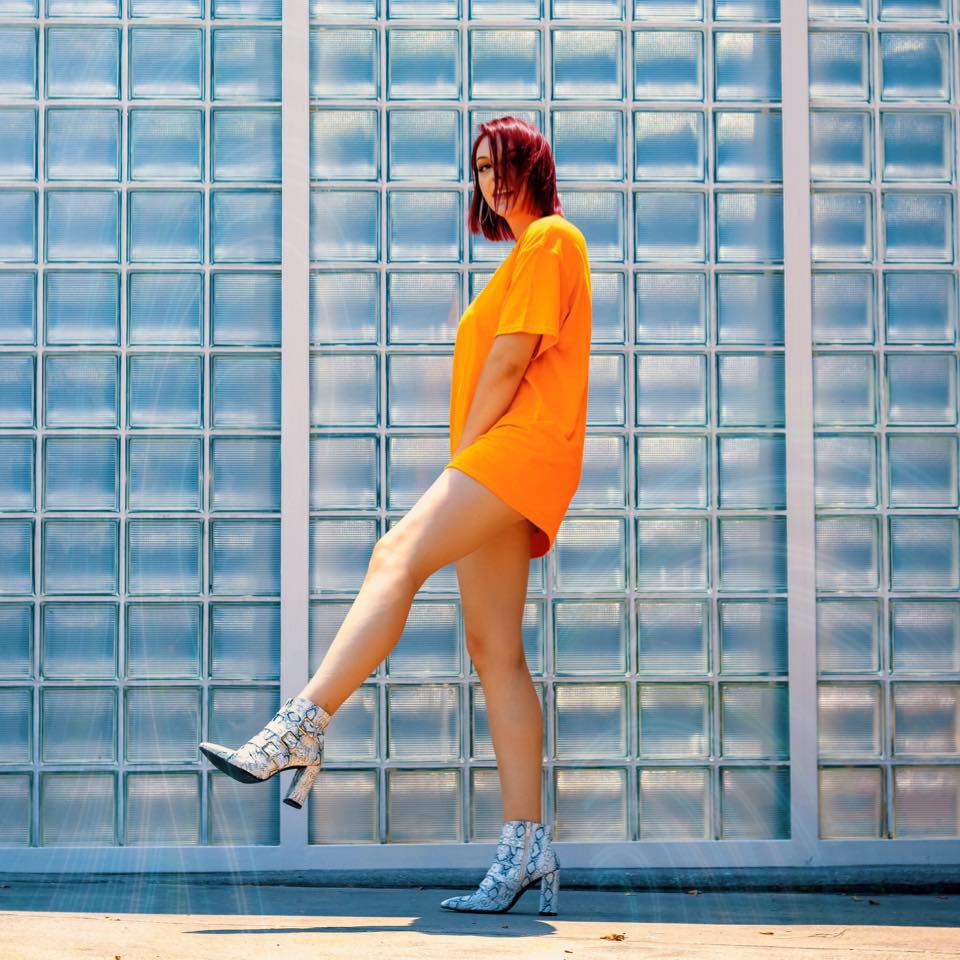 Lightning Round! Don’t think too hard about it — first thing that comes to mind:

You can find more of Deza on the web and follow her on social media @thisisdeza.

Article Images: Deza posing for various promo photos: one of her sitting in front of a keyboard and laptop, a picture of her with a gem-encrusted hand and oranges lying beneath her, and an image of her posing in front of a glass block wall. (Photos used with artist's permission.)