At Live365, we were first introduced to Gemma Laurence thanks to her expertly-written pitches for her music clients. Take it from us, Gemma's writing about music is exciting, unforgettable, and has us wanting to learn more (you'll find some results of her pitch work in our 10 LGBTQ+ Artists You Should Know in 2022 list and Brad Walsh piece, for example).

So, when we found out that Gemma is actually a prolific singer/songwriter herself, it didn't come as much of a surprise. What did surprise us, however, was just how transfixing her discography is. From the moment we heard the first few lyrics of her latest single "Lavender," we were bewitched. Her poetic folk bops have a way of taking you back in time, or making you feel like you're a character in a dreamy queer romance novel. Listening to the soothing tunes on her debut album Crooked Heart is like lapping up a bowl of chicken noodle soup while wrapped in a warm blanket: it's a completely comforting experience.

Gemma's been making big strides lately. She's been featured in NPR, Under the Radar, Earmilk, Country Queer, and has even made an appearance on the Tonight Show Starring Jimmy Fallon. Thanks to her storytelling skills and soft vocals, she's been compared to great acts like Joni Mitchell, Phoebe Bridgers, Tomberlin, and Adrianne Lenker. We're still counting our lucky stars that we were able to get a hold of Gemma for our next Emerging Artist Interview. For this chat, we talked about her latest single "Lavender," her upcoming album of the same name, and the growth of her songwriting talent. Without further ado, here's Gemma Laurence! 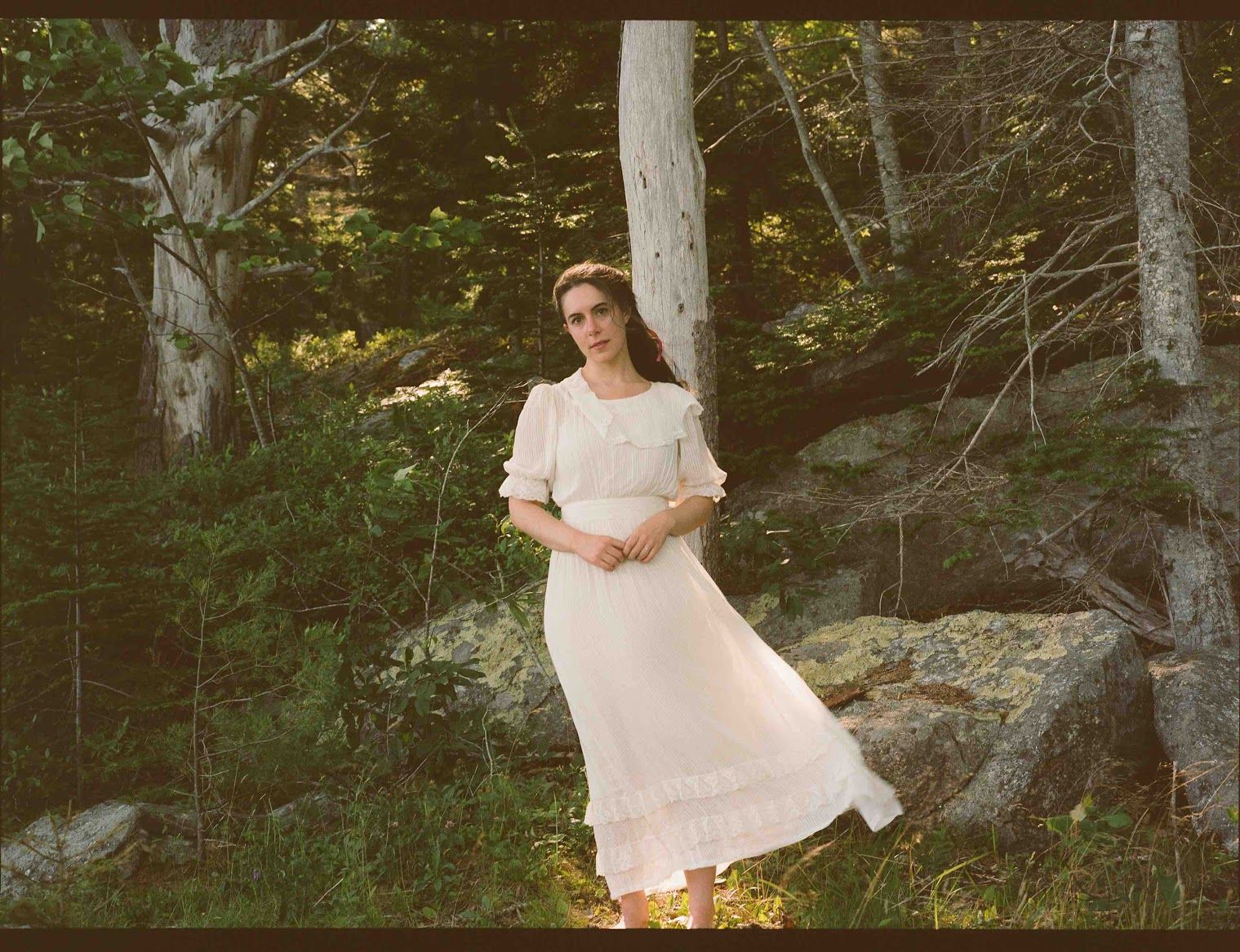 Tell us a bit about yourself. Where do you hail from and how did you get your start making indie folk music?

Hi! I’m from coastal Maine, but grew up in the UK for part of my childhood. I’ve been playing music since I was a little kid, starting out on classical piano. I’ve never been great at sight-reading or music theory, so it really rocked my world when I picked up an acoustic guitar and started learning folk songs from ear.

You have been praised greatly for your songwriting abilities. How did you cultivate your talent for songwriting? Was it something you worked on yourself, or have you received any formal songwriting training?

Thank you! I had a really amazing guitar teacher in school (Tom Whitehead) who taught me so much of what I know today in terms of guitar technique. I started writing music as soon as I learned chords – everything from silly joke songs to environmental protest songs. But it wasn’t until I learned “Both Sides Now” by Joni Mitchell (which is in open tuning) that I really started developing my current sound.

I adore open tuning because I don’t know half the names of the chords I’m playing - it feels incredibly liberating, like I’m inventing something new every time I pick up my guitar or my banjo. In terms of my lyrics, I’d say a lot of my inspiration came from reading literature in college that inspired me. I was an English major, and something just clicked in my brain when I read Adrienne Rich, Elizabeth Bishop, Sylvia Plath, Frank O’Hara, W.H. Auden, Sappho. I end up weaving a lot of poetry fragments into my songs.

Have any songwriters in particular influenced your work?

I grew up listening to a lot of Joni Mitchell, Ralph McTell, Bob Dylan, Norah Jones, Natalie Merchant – I’d still say these are still some of my biggest influences in my songwriting. I love how Joni Mitchell paints a picture with her words, how Bob Dylan tells a story, how Norah Jones expresses so much with the nuance of her vocals. These days I listen to a lot of Adrianne Lenker, Phoebe Bridgers, Ada Lea, Sharon Van Etten, Skullcrusher, Courtney Marie Andrews – those were some big sonic influences for my upcoming album.

Perhaps one of your coolest songwriting achievements to date has been winning a songwriting competition on The Tonight Show Starring Jimmy Fallon, where you were tasked with penning a tune in under an hour and performing it in front of a studio audience. How did you get selected to perform on the show, and what was the experience like?

That was such a surreal experience – I’m still in shock that it happened. I was an audience member and they picked me out of the audience. I had one hour to write a song, and before I knew it I was up on stage performing in front of a live audience, a bunch of cameras, and Jimmy Fallon himself (who was a complete sweetheart and made me feel so comfortable up there). It was so crazy – I’ve been watching the show forever, but I never thought I’d actually be on it!

We’re dying to know...will we ever get a recorded version of “Is It Love or Is It Cake?” in the future?

Ha! I think that version on YouTube is where we’re gonna leave “Is It Love or Is it Cake,” alas. I don’t think I could recreate it in a studio setting. But we’ll see… guess you’ll have to keep an eye out for cake themes in my upcoming album!

Earlier this month, you released a gorgeous new single called “Lavender.” Tell us a bit about it. Where did you get the inspiration, what was the songwriting process like, and how did you record it?

I wrote “Lavender” for my best friend in the midst of her transition. I wanted to write a song that would honor the hardships and the trauma of coming out and transitioning, but also celebrate the beauty of it too. So it’s a song for her, but I hope it can be an anthem for the queer community too.

“Lavender” actually started out as a solo banjo song that I wrote over the pandemic and sent to her in an iPhone demo. I still love that version of the song, but I love how it evolved into this bigger rock anthem when we got to the studio. It was actually my producer Charlie’s idea to change around the arrangement and make it this rock anthem, which really pulled the song together and made it feel like the triumphant anthem I wanted it to be.

The title of your latest single is actually the same title as your sophomore album, which will arrive November 4. What can fans expect with this new release? In what ways will Lavender be different from your debut album, Crooked Heart?

The new album (Lavender) definitely feels like a big departure from my debut record. It’s much bigger – more musicians involved, more instruments, more production. It feels much more lush and cinematic, even on the stripped back songs. Thematically, it feels a bit more grown-up too. I look back on Crooked Heart and although those songs hold such a special spot in my heart, they do feel like such immediate reactions to things that were happening to me in my life – I’d be upset so I wrote an angry song, I’d be in love so I wrote a happy song.

My new album feels more reflective as opposed to reactive. I wrote it over the pandemic when I was pretty much alone for 15 months. The songs arose from quieter moments of reflection. They’re quite nostalgic. And they’re loving. It’s wild looking at the first song on my first album, contrasted against the first song on my second album. They’re about the same person! But one shows me in a moment of anger and betrayal, and the other shows me coming to terms with it, and thinking back on that time in my life fondly. I also open up about my queerness on Lavender, which feels really important to me. The album reads like a collection of vignettes exploring queerness, sexuality, intimacy, friendship, and loss. Each song feels a bit like a world in itself.

Besides being a performer, you also work as a publicist for other musicians like yourself. How long have you been working as a publicist, and what has the experience been like? Have you learned anything from the job that you feel has aided your own music career?

I’ve been working as a publicist for nearly two years now, and I absolutely love it. It’s so cool getting to promote other independent artists as my job! It feels unreal. Some people say that you shouldn’t be an artist and work in the industry, but I couldn’t disagree more. One informs the other so nicely. As an artist, I’ve learned so much about the press landscape through my PR job. As a publicist, I can empathize with my clients as another artist like them.

Any advice for performers and songwriters looking to break into the music industry?

Don’t get too fixated on “results” or “growth” when you’re early on in your career. If you focus too much on social media followers you’ll never write music, if you focus all your attention on getting a label deal or press before you’ve put out any music, you’re probably wasting your time.

Focus on your craft, surround yourself with like-minded creatives who inspire you, and don’t stop writing. Perform as much as you can, workshop your stuff, and when you’ve gotten to a point where you’re really happy with what you’ve made, then you can go into marketing mode. But those “big breaks” people talk about? They really don’t happen overnight. They usually happen after years of hard work. So keep at it! And be patient. The right people will find your music if you put the time into it. But it might take some time. 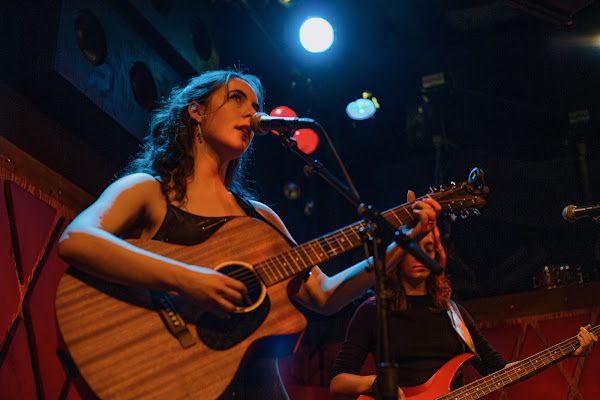 You can find more of Gemma Laurence on the web and follow her on social media @gemmalaurencemusic.

Check out our selection of free stations streaming folk music at Live365.com.

Article Images: Gemma Laurence stands under a shady tree with her eyes closed, Gemma stands in the middle of a forest, Gemma plays guitar during a live show. (Photos by Beatrice Helman and Lexi Yob, used with artist's permission.)